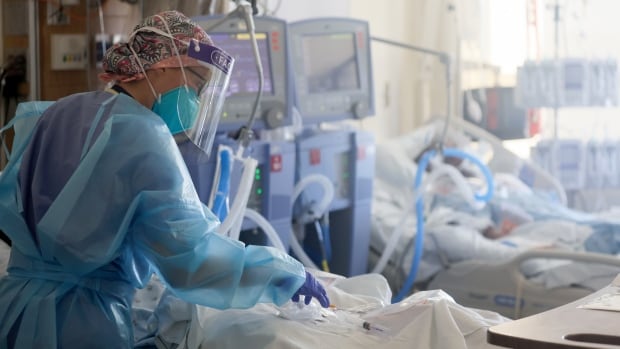 The number of health-care vacancies in Nova Scotia has risen by about 24 per cent in the last six months, but the head of the office tasked with recruiting physicians and other medical professionals isn’t surprised in the slightest.

Numbers obtained by CBC News show that on March 11, there were about 2,540 vacancies across all fields, an increase of 492 positions since the recruitment office was formed by the Progressive Conservative government.

“I do anticipate that six months from now it will be better,” Dr. Kevin Orrell, the CEO of health-care recruitment for Nova Scotia, said in an interview before travelling to London to attend a recruiting event for doctors.

“All of this recruitment, of course, is not an overnight fix. It doesn’t occur quickly. We will see the benefits over time.”

It’s important to note the number of vacancies is not a head count of how many workers the province needs; rather, it reflects the full-time equivalent of all the vacancies, and it changes daily.

It also does not represent every vacancy. The last report in October included a variety of IWK positions, but CBC News did not receive the updated number before deadline.

Orrell’s overseas trip marks a return to a pre-pandemic way of marketing the province that has benefited recruitment efforts in the past. He’ll be joined by representatives from the province’s Office of Immigration, Nova Scotia Health, and Dalhousie University.

“We are going to provide information and to offer jobs to any of the U.K. physicians who wish to consider Nova Scotia as a place to live and work,” said Orrell, who was expected to depart Nova Scotia on Thursday.

His team has also been dispatched to find international help.

“The team has also been to Singapore and to Dubai to look for nurses and [continuing care assistants] and other health professionals, and they’ve had a very warm reception,” he said.

Orrell knows the pressure is on for his office to produce results.

Two weeks ago, he addressed the province’s all-party standing committee on health for the first time. Opposition MLAs pressed him for exact numbers of current vacancies, but Orrell did not come to the meeting with specifics.

The numbers released to CBC News from his office and EHS show registered nursing vacancies have taken a significant leap, with nearly 300 positions opening up since Orrell was appointed to his role.

“I think everybody anticipated that there would be some worsening of numbers because we are coming out of the pandemic. There are a lot of people who have worked very hard, some people are leaving the workforce or transferring to other jobs with the same employer,” he said.

“We knew or we anticipated that things would get worse before they get better.”

Orrell pointed to a flurry of incentives and promises announced by the provincial government recently that are laying the groundwork for long-term change.

Two weeks ago, Premier Tim Houston announced a new incentive program for doctors who agreed to set up shop outside of the Halifax Regional Municipality.

Already, Orrell said, they’re seeing the benefit of offering jobs to all nursing students in the province.

A recent graduating class from St. Francis Xavier University in Antigonish, N.S., saw all 40 members of the nursing class accept positions in Nova Scotia. Orrell said he’s anticipating a boost with upcoming graduations of both nurses and resident doctors.

Even so, he wouldn’t offer up targets for six months from now.

“I wouldn’t like to predict that I have a crystal ball that can give you an exact confident answer that we will have made a percentage improvement and be very specific about that,” he said.

“We are coming to the end of the pandemic. So what I can tell you is that I anticipate there will be a stabilization of those who will be leaving the workforce, and we will be entering those who are studying and who have successfully completed their training and become licensed.”

“The office of recruitment needs clear and tangible metrics,” Janet Hazelton said in an email.

“[The Nova Scotia Nurses’ Union] and other nurses’ unions across the country are calling for a national health human resources strategy to track and predict gaps that will steer us out of this crisis and prevent another.”

Hazelton added “the on-boarding system for new staff is cumbersome and needs to be streamlined to make it faster and easier for new hires.”

Orrell said those types of issues are on his plate. He said the office is working on ways to mentor young nurses and move senior nurses to areas that will encourage them to stay on longer.

The office is also working on developing an assessment program so it can hire more international nurses.

“It is the hope that that gradual improvement will continue as we go forward so that we’re not repeating this major effort all the time,” said Orrell.