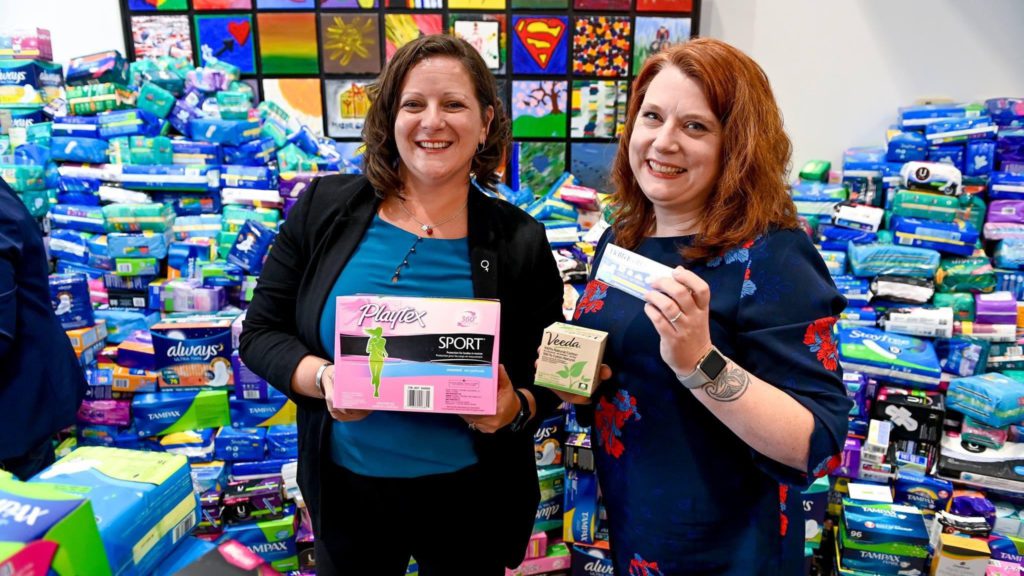 Period poverty affects people who menstruate around the world, and research by the United Way Period Promise Campaign has shown that 50 per cent of everyone who menstruates has struggled to pay for menstrual products in their lifetime.

Nikki Hill, co-chair of the campaign says when the period promise campaign first started, it focused on collecting period products and distributing them to non-profits.

“Then we expanded it as if people started telling us…about how they skipped buying menstrual products because they need to buy food,” Hill said. “Or if you’re a student where you’re taking paper towel and using it while you’re doing your education versus you having to use those spare dollars for menstrual products.”

Hill says she has also heard stories of people who had to skip going to work due to lack of access to menstrual products.

“So it was quite illuminating as to what people what measures people had been going through, when they couldn’t afford to buy menstrual products to find other ways to deal with their periods.”

Now the campaign works to make period products available for free in more public spaces for anyone who needs them.

“From day one, our work has been very focused on trying to be as equitable and accessible as possible,” Hill says. “Our networks include trans activists who have been very instrumental in this space and ensuring that any policies we’re looking at include all washrooms. We have a period promises policy agreement, which asks employers and organizations to commit to providing menstrual products in all washrooms.”

Since the campaign launched, Hill says the group has distributed 2.5 million period products around B.C.

An annual Period Promise Campaign collection drive will be taking place between May 3 to June 6, where people can donate money to the campaign, or set up collection drives in their communities.

The group has been working to sign on organizations and government agencies to commit to providing menstrual products for free. The City of Victoria was the first municipality to sign on to the campaign in 2019.

At the time, the city committed to providing free menstrual products in all washrooms in all civic facilities, including City Hall, Crystal Pool and Fitness Centre, and downtown public washrooms.

A spokesperson for the city says period products are available in 23 facilities around the city.

Laurel Collins, then councillor for the City of Victoria, and now the MP for Victoria, put forward the motion to implement the policy and says it was an important step for the city to take.

“Menstrual products are an essential products for people who menstruate and I had been talking with organizers in the United Way, who had been really pushing to end period poverty and it seemed like a really important step,” Collins said. “At the time, it was really so it was amazing that we were able to provide free menstrual products in all city facilities.”

She says after it was implemented, she heard from people who were positively impacted by the change.

“I spoke to people who use the products in the washroom said just how it was a meaningful act when it comes to gender equality and reducing barriers,” Collins said. “Also, I heard feedback from folks that they were glad to see that it was placed in all the washrooms and so that people of all genders who menstruate could access.”

Now, as MP, Collins says she is pushing the federal government to take action on period poverty.

“My colleagues and I have been pressing this government to have tampons and pads in federally regulated workplaces, and they promised to do this in 2019,” Collins said. “So far, they failed to change the Canada Labour Code to implement the change. Our federal government should be leading the way on ending period poverty.”

Collins says she is also pushing the government to recognize the lack of access people in rural and remote areas can face.

“There’s been lots of concerns about the lack of available products in rural and remote areas, and especially around the affordability of these products,” Collins said. “Oftentimes, they are double the cost … and just ensuring that we are tackling period poverty in every region from coast to coast to coast and especially for rural and remote communities who face additional barriers.”

Hill says there are now many other municipalities who have signed on to the campaign, including Burnaby, North Vancouver, Port Coquitlam, Coquitlam, and Port Moody.

Gayle Ireland, president of the Goldstream Food Bank says the City of Langford reached out this morning to make a donation of menstrual products.

“We got an email this morning to the Goldstream Gmail saying, ‘we’re coming by about noon,’” Ireland said. “She said ‘we have feminine products to deliver and some cheques.’ And we were blown away when the truck pulled up.”

She says the food bank had given away their last menstrual product this morning, so the donation from the city came at the right time.

“We had nothing we used up our last this morning,” Ireland said. “Our last package went out this morning with a hamper. So it could not have happened on a more timely basis.”

In her work, Ireland says she has heard similar stories as Hill including people tearing up old clothes to use on their periods.

“And I don’t think in this day and age that any woman should have to deal with that,” Ireland says. “It’s a natural function, and I think these women are very grateful.”

Ireland says the food bank does not have room in the budget to supply personal hygiene or menstrual products, and relies entirely on donations of the products.

“Everything that we can supply that’s not a food item frees up expendable cash for that client to go and purchase what they need food wise, or otherwise maybe they need a bottle of shampoo,” Ireland said.

She says along with the products that were donated, the city also donated $5,000 to be used to buy period products.