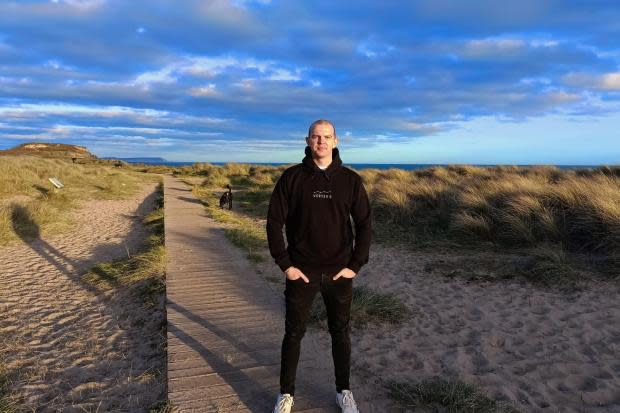 AN ENTREPRENEUR has launched a bid to “modernise” the fitness industry with a tracking app to better record people’s exercise movements.

Vertex 5 is uses wearable sensors to help track a wide range of movements, from bicep curls and squats to press-ups and star jumps.

All are logged automatically and displayed on the user’s phone.

The fitness tracker market is expected to be worth more than £100billion by 2028.

Bournemouth-based founder Josh Brooks, 29, has a patent pending on the sensors used by Vertex 5.

He said: “After trying several different products, I was amazed how poor the accuracy was at tracking basic exercise movements.

“I felt if we could solve that problem through technology and add in a layer of accountability, we would be on to something special – and we’ve done just that.”

The business begins a pre-seed funding round today. Its product is designed to track both individual and group workouts. Users are able to “battle” with or against a friend in real time.

The team behind Vertex 5 has so far operated remotely and plans to create a hybrid team.

Co-founder and chief trading officer Roman Hvozd is based in Lviv in Ukraine, and the lead Android developer recently moved from Nigeria to Scotland. The business aims to support its staff wherever they choose to work.

Mr Brooks said: “For a long time technology used in gyms in relation to creating, tracking, analysing and managing gym routines has been in need of modernising.

“Roman and I started this ‘impossible dream’ over 12 months ago and are thrilled to be opening our pre-seed investment round in the next two weeks. It’s a really exciting time for us.

“We still have lots of decisions to make such as where our first office will be and if our distribution centre will be at that same location. For the foreseeable future we plan to be based primarily across the south coast.

“As a team, we’re the result of curiosity meeting tenacity – and if you’re the same and you would like to grow your career with us, we would love to hear from you.”

The company expects to start selling its product and subscription service fromthe fourth quarter of this year. The first products will be released to people on an early access list at a price below £50.

Mr Brooks started coding at 14, creating a monetised online text-based game. He went on to lead the marketing department of the Dorset-based online marketplace OnBuy.